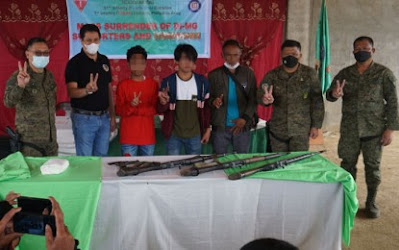 Lt. Gen. Alfredo Rosario Jr., commander of the Western Mindanao Command (Westmincom), said the surrenderers gave themselves up Monday at the headquarters of the Army’s 51st Infantry Battalion in the Lanao del Sur town of Piagapo.

Rosario said the two Islamic State for Iraq and Syria (ISIS)-inspired DI-MG combatants who surrendered are minors. They were only identified as a certain Paris and Akmad, both 17-years-old and residents of Piagapo.

In a statement Tuesday, Brig. Gen. Jose Maria Cuerpo II, the Army’s 103rd Infantry Brigade commander, attributed the DI-MG’s mass surrender to the “intensified combat operations and the unwavering support from the local government unit and the populace.”

Cuerpo said Paris and Akmad yielded a Garand rifle and a caliber .45 pistol, while two of the 49 supporters also handed over two Garand rifles.

“This is their chance to renew their lives and reshape their future. Rest assured that we will watch their back and guide them as they reintegrate into mainstream society,” Rosario said of the surrenderers. (PNA)