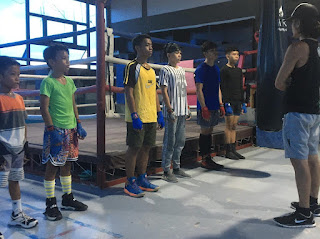 “The clinic will also be offered to different barangays in Buhangin,” said Engelbert “Aguila” Moralde, a former amateur and professional boxer.

The clinic will also be conducted by his elder brother Richard Moralde, 36, a former amateur boxer.

The training will start at 4 p.m. to 6 p.m. The Moraldes are scouting for young players, aged seven to 15 year-old that will see action in invitational tournaments,

“If there will be an invitational tournament, then we will practice every day,” said the 29-year-old Moralde.

Moralde said that the clinic right now is held every Monday, Wednesdays and Fridays. There are already at least 10 young boys already attending the clinic in NHA.

“But we still need to look for potential players also so that we will have entries in all weight categories,” said Moralde.

They are hoping to get players for DAVRAA and Palarong Pambansa.

The Moralde Boxing Gym is located on the 3rd floor of the Moraldes. The owner of the gym is another brother Donix Moralde, 32, who sometimes helps in teaching boxing.

It has a boxing ring, four punching bags, speedballs, barbells, dumb bells and other equipment for boxing.

“If there are many players already, the schedule of the training will be changed to 2 to 4 p.m. while the 5 to 8 p.m. is for the clientele,” said Moralde.

The other sibling is 28-year-old super featherweight John Vincent “Mulawin” Moralde (24-5-0, 13KOs), who is still active in professional boxing. He is based in Miami, Florida, USA and his manager is Osmiri “El Moro” Fernandez.

The Moralde boxing team recently had an invitational tournament in Bansalan and Maco.  (BY LITO REYES)